*Ansible means the internet in the Ender-verse….

So it comes out Friday, a film version of a book I have loved since I was the age of Ender Wiggin when he pulled the trigger on the Bugger race.

(Not that the trailers haven’t given away the whole story anyway.)

from Google Images and hatrack.com

Orson Scott Card, SF novelist and Mormon, (which is a character combination one would think was more common, given Mormonism’s similarities to SF) released the book Ender’s Game in 1985. Detailing the trials and tribulations of a child prodigy named Ender Wiggin, the book is about children aged six through twelve who are separated from their families and taken to an orbiting Battle School, where they are trained in military and troop tactics in the guise of immersive computer simulations and actual zero-gravity group battles. The children are enlisted to be humanity’s last stand against a race of insect-like aliens dubbed Buggers who have sent an invasion fleet towards Earth. Sidenote: Since “bugger” sounds vaguely racist or something, the filmmakers have given  the aliens a proper name–“Formics”. Uh, OK. In the book, the human race can’t know the name of the alien race because they can’t communicate with them. The film has the humans somehow either learning the Buggers’ name, or they just choose not to call them something that smacks of rudeness. Typical Hollywood sanitization it seems to me.

One way to interpret the meaning of this story is as an indictment of our own world where old men run their brutal military operations using children(i.e. young men and women, though in some nations, literally children). Some commentators have further interpreted Ender as a Jesus figure; others, probably in response to Card’s political views(I’ll touch on that later), see Ender as a Hitler-type trying to exterminate a race of intelligent beings. But Ender does not do what he does from any inner motives. He and all the children are exploited by  adults  “for the greater good”, which is a dubious cop-out to say the least. Claiming that only a child can be manipulated into unwittingly doing what the human race can no longer do, which is use death and destruction to tactical advantage, the future human war-machine molds Ender through-out his entire life, quite literally from before conception.

from Google Images and culturemass.com

This is going to make a fun movie, huh?

I’m afraid not. In fact, I’m pretty sure this movie is going to suck. It almost has to suck, if you follow me. Judging only by the trailers and my own thought process, I’ll admit, it looks like the film of Ender’s Game is going to focus on the action elements of the story, which are only the surface. The torments the battle-school children inflict on each other, as well as the manipulations they go through at the hands of the adults, will have to be glossed over to make the story more appealing.

Ender himself, seen by the adults from infancy as the most likely candidate to destroy the buggers, is a psychopathic genius. Granted, he only gets violent in self-defense, but when he has to fight, he fights to win. In the course of the novel, he kills two other children who bully him; his motive is clearly shown to be only to beat them decisively so that they no longer will be bullies, but he unintentionally murders the two boys. (The fact that they die is kept from him by the adults, however, and he doesn’t find out till his purpose is fulfilled.)

Does this sound like a cool action film to take the family to?

It also irks me that the kids in the film all look like teenagers. We follow Ender in the novel from the age of six! The kids are all twelve and under when they finally fight the Buggers for real! (‘Scuse me–Formics!) So immediately the timeline of the book has been fucked with to make it more palatable to movie audiences. ‘Nother Sidenote: this director, Gavin Hood, graced us with Wolverine: Origins a few years ago. I have nothing more to say right now about that turd of a movie.

Back to the novel: recently rereading this classic, the book felt surprisingly dark to me. As a kid, the dramatic elements were certainly secondary for me to the action stuff, which is very cool. The psychological drama of Ender’s Game is powerful, though, and would overwhelm a film that seeks mainly to entertain. Can’t help feeling the dark shit is going to be relegated to an undercurrent in the movie, if it’s there at all. And I always felt that the so-called “twist” feels more like a natural culmination of the novel’s arc. I think most readers go “Oh. Well, that fucking figures.” The movie trailers, by the way, pretty much give away the novel’s “twist”. Anyone being surprised by the ending who is any older than Ender’s actual age either wasn’t paying attention, or is an idiot. Already the film adaptation has blown it, in my opinion.

And, yes, I’ve been talking out of my ass here, making pre-judgements on something I haven’t seen yet, just like Christians tend to do. It’s presumptous of me to do a pre-review of something I haven’t even seen yet. And I actually hope I’m wrong. We’ll know in a few days.

Yes, I am going to see it. Comes out today (Friday, Nov 1). I may not go this weekend, but I’ll see it soon. (No, I don’t do midnight nerd-screenings anymore. I’m a grown-ass man, as Cedric the Entertainer would say!) So when I’ve actually seen the film, I’ll post a real review of it.

There’s another whole controversy you may not know about.  A segment of people are calling for a  boycott of the film because of Orson Scott Card’s political views. He’s been vocally against Gay Marriage and equal rights for same-sex couples in general and has funded organizations that try to stop the expansion of same-sex marriage. While I’m for equal rights, I could give a fuck whether Mr. Card is or not. I still love the book and will see the movie. Besides, it doesn’t hurt him if the movie doesn’t do well, the man has already been paid. So don’t be stupid, people. If you like the story and want to see the film, just go. He may be a dick, but in this country you’re allowed to be a dick, right? And that dick wrote some cool books, especially about Ender.

Since I don’t have a closing line, let me close with a bunch of Ender memes. 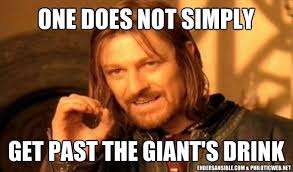 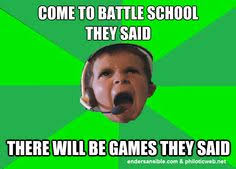 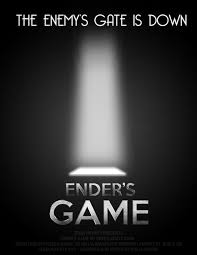