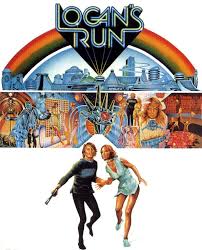 We’re travelling along a deserted landscape, while quietly but slowly increasing, two beautiful musical notes repeat. Off in the distance we see a handful of large crystalline domes huddled together on the plain. The two notes build and swell on the soundtrack until, at the moment of crescendo, they become a glorious sequence of chords as we are upon the domes. And then, we’re in.

Inside, there’s a city. A wondrous city of lights and speeding vehicles. An undulating tube shoots sleek cars across the synthetic sky. We see glittering technological pyramids and other geometric shapes that are undefined by our experience. The music becomes staccato, shimmering, as synthetic as the city but somehow more fantastic.

No words can really cover all the emotions stirring my brain as, at the age of six, I watched the opening minutes of Logan’s Run. While it wasn’t the first movie I’d ever seen, it was the first time I felt completely immersed in a different reality. The opening shot of the domes and the city within still look interesting to our eyes today, but not as convincingly real as contemporary visual effects would be able to make them. However, to my young eyes, this film was a new and entrancing world that completely fucking blew my little mind.

If you’ve never seen this one, Logan’s Run is a dystopic tale set in the twenty-third century. The premise is that of an ideal world where everything is pleasure. Thousands of gorgeous young Caucasians dress in colorful garb and live happily together in a fancy shopping mall. It’s an easy and playful life. The only catch is that due to limited space, population has to be strictly controlled. When a person reaches the age of thirty, they take part in a ritual called Carrousel. There, they are basically annihilated in front of a cheering crowd who believe that Carrousel is a chance for “renewal”.

You guys know you’re about to be killed, right?

Some people in the City know Carrousel for the bullshit it is and rather than submit to it, they become runners. Runners are looking for a place known only as Sanctuary, a kind of urban legend that has risen up among the folk to give them hope of life after thirty.

Enter: Sandman. Logan 5 is a Sandman, an elite police officer. Since there is no crime in this perfect society, the only thing a Sandman does is terminate runners. And Logan 5 has to be one of the best Sandmen because he’s played by Michael York. (He signed my DVD at Borders. Dude’s awesome.)

See that crystal in his palm? That’s a Lifeclock and every resident of the City has one. When it’s red like that, you’re between twenty-four and thirty years old. (For the record, Mr. York was about thirty-three when he shot this film.)

So one night, Logan and his partner, a hard-case called Francis 7, terminate a runner and find an ankh on his body. Later, the buddy cops party with a few girls ‘cos pleasure first, remember? The next day they check in at Sandman HQ. When Logan turns in the ankh to evidence, the City Computer, which runs everything, grills him about the word “Sanctuary”. It tells him the ankh symbol is related to this word. It says over a thousand runners have never been accounted for. When Logan asks if perhaps some of them were “renewed” at Carrousel, the computer gives him silence.

He goes “Why are you telling me all this?”. And the computer, in its sexily blank female voice lets him know he is to become a runner and find this Sanctuary if it exists. Then, the red Lifeclock in his palm begins to blink, meaning his time is up. Freaked completely the fuck out, Logan drifts back out into the City.

If you’ve actually seen Logan’s Run, you know the concept is better than the execution. For its time it was cool, though. And to a six-year-old kid like me with too much imagination?

Would have been cool to see it in this dome theatre! I saw it at a drive-in.

It’s all Logan’s fault for setting me on my course in life. Logan made me stranger than other kids. (Though my Mom assures me I was pretty strange all along.) As much as my parents, or family, or friends, this movie shaped my life. That may seem weird to some people, but for some of us, the world of imagination is that powerful. Its effects are transforming. After this movie, there was no way I was ever going to be a lawyer. A teacher. A baseball player. Any of the things I thought in my early years I might become, all of those possible realities were shattered by Logan. I immediately began to start thinking about crafting my own worlds. I wanted to be a creator.

Not that that’s something special to me, but I certainly felt unique among the people I knew personally.  Not everyone seems to have that moment where they knew they wanted to create something in this world. Something better. Or at least stranger. Those of us who get struck by that particular cosmic bolt really don’t have a choice. Even if no one ever sees it, we have to create something. It’s not an option. Whether what we create is shit or a hit, when you’ve been blasted by that bolt, your life is not completely your own anymore.

Most people you meet see fiction as an escape, an entertainment. And it is that. But to some of us, it’s even more. We’ve probably all met people who hate movies, who don’t read, who think imagination is a waste of time. I always feel glad that I’m not them. What a sad way to live, it seems to me.

A majority of people do seem to enjoy stories, though. This does not mean they understand the creation of them. Normals tend to feel that people who create fiction are strange. They don’t “get” us. Who can spend so much time and energy in a different world, creating a fictional reality? This is not a thing that is easy to express to normals.

We who want to create things are trying to add our voices to the eternal. A grandiose, arrogant ambition? Maybe.  Why do human beings spend so much time and energy making up stories for each other? That question has been asked since the first primitive cave-art got scratched on a wall. I don’t know why, can’t tell you. But we wouldn’t want to do it if it wasn’t important.

To me, the word “Sanctuary” became synonymous with creativity. The drive to write fictional worlds of my own. Unlike the poor, doomed runners of Logan’s Run, I feel like I reached my sanctuary. This crazy, silly film led me there.

Man, I could go on and on about what Logan’s Run did for me. And I probably will another time. Just know to this day,  it’s like the one film that I can still watch with those child’s eyes and kind of relive those initial feelings. Does anything from your childhood do that for you?

Oh yeah! Logan’s  Run also had titties in it.

No, that’s not the only reason I liked it! I told you, I was hooked from the opening. This scene is about an hour in. Still……The Seventies were great! You could see breasts in a PG movie. Bless you, Jenny Agutter. See you tomorrow, EvDaDaDecs!

5 thoughts on “Running for Sanctuary”