This is a spoiler-heavy breakdown of last year’s Man of Steel movie. So if you haven’t watched it, but have an interest in seeing it—

The fuck is wrong with you? Why haven’t you seen it already? Damn!

I have no sympathy. None.

The film tosses us into the final chaotic days of Krypton in a visceral  way that’s only ever been done in the comics. Russell Crowe as Jor-El is fantastic in this sequence, showing that heredity does mean something in who Superman becomes as Jor-El sets the heroic tone rather than just strolling around moping about his world’s fate. A break in the action occurs as Jor-El makes it home where baby Kal-El is being prepared to be sent away from the dying world. The scene between Jor-El and his wife Lara, played beautifully by Ayelet Zurer, where they discuss the need to send their son away into the unknown is very powerful.

In contrast to Jor-El, we meet General Zod and his inner circle. He is the foremost military leader on Krypton and, in its final days, he leads a group of loyalist-warriors who have decided to save Krypton and its people through a military coup. What’s intriguing about Zod from the jump is that, in his mind, he’s doing everything for the good of the Kryptonian people. Michael Shannon doesn’t play the role as a villain. If you look closely, you can see the conflict behind his eyes as he commits certain actions, particularly when he murders Jor-El. The subtly tinged regret in Zod’s voice and face at key moments in the film really struck me. One view of Zod is that he’s quite a noble character who is willing to do the worst for his ultimate goals, which he deems selfless. 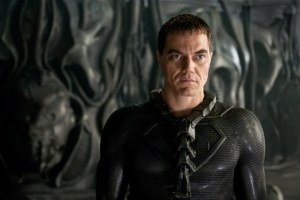 The Superman origin is well-known, even to people who have never touched a comic book. For this reason his upbringing by the Kents of Kansas, his discovery of his alien background and his eventual awakening as Superman is a bit of treacherous territory to cover in a film. This is the boring part. The way this is somewhat overcome in Man of Steel is by intercutting flashbacks of key moments of his childhood while the narrative keeps moving ahead in present time. So the past continually illuminates the present in the script, which is a technique I love. As Christopher Nolan was one of the main developers of the story, think of it kind of as Superman Begins. The structure of Man of Steel is much like the first installment of Nolan’s Dark Knight trilogy.

Wait, she wasn’t in the movie. But she should have been…

First rule of Hollywood: If it works, repeat it. In this case, that’s not a bad thing. Look, people, just watch Superman 1978 if you prefer that model. Why would you just want a new movie to remake that formula? This version is a reboot, a bold updated version. Man of Steel’s hero is much more in tune with the comics than any other version to date. I feel kind of shocked when a critique compares Man of Steel unfavorably with the Christopher Reeve movies. Yeah, I loved them too–at the time. But they’re outdated! Bryan Singer tried to emulate the feel of those movies when he made Superman Returns. Remember what happened? That movie fucking sucked.

Who Really Directed this Thing?

Not to take away from Zack Snyder. My man did some good work on 300 and Watchmen, that last film being one of the most criminally underrated comic book films ever. He does a fine job directing Man of Steel, too. I’m not trying to say he didn’t. What I love about him is that Mr. Snyder is a true fan, part of the new generation of directors that really get the material and don’t try to go all campy with it and shit. And he’s become very adept at all the technique that an epic film requires.

But make no mistake. This is Christopher Nolan’s Superman. He drove the early concept they went with and much of the tone the movie would take. Much of its style is very much in the vein of the Dark Knight trilogy. Like Nolan’s Batman movies, Man of Steel is shot like these events are really occurring rather than in an uber-stylized manner. If Superman actually existed, this is what it would look like to us and how we would react.

We are also presented in this story with a Superman that is both alien yet human. All earlier Superman films have tried to downplay the fact that Kal-El is from another world. In Man of Steel, his alienness is front and center. While fantasy elements are still in place this movie is clearly science fiction, largely due to Nolan’s take on the character. If you are a comics reader you know Nolan’s story pays most of its homage to Superman: Birthright and also John Byrne’s 80s relaunch mini-series that was also entitled Man of Steel. (Coincidence? I think not!)

The relationship between Lois Lane and Clark Kent doesn’t have much time to develop in this film, and this let down some viewers. To be honest, I’m a superhero guy and I could give a fuck about romance. I want it there, but I don’t want the story driven by it. In Man of Steel, their attraction has to do most of the work of relationship building. It’s palpable that Lois is hot for Clark and that he digs her, too. Then the force of the plot offers little time for them to reach beyond the initial thunderbolt of physical magnetism. When they finally have a moment to kiss, though, it’s natural and believable. The romance will need to be developed in the sequel, however, but I’m sure it will be.

You don’t see a ton of the Daily Planet either, another choice that sets this reboot apart. Clark doesn’t work there yet! We meet a few Planeteers, though. Amy Adams is a fine Lois, quite different from the usual depiction as she may be. She nails down Lois’ drive and intelligence and especially her grit. We only get a couple of quick scenes with Laurence Fishburnes’ Perry White, but he’s always good. His Perry doesn’t yell or kick up a fuss, he controls his people with quiet reasoning and logic but all the reporters are still plenty intimidated by him, except Lois of course.

And there’s no goddam Jimmy Olsen! I love that, ‘cos that guy is annoying as hell. I’ll be a bit dismayed if he turns up in the sequel.

I think it’s great that Lois is involved with the machinations of Man of Steel’s action scenes rather than just observing them or being rescued all the time. (Though she does need rescuing three different times!) Some critics of the movie find her involvement in these parts unrealistic, I guess. I would grant that it’s definitely a device to get Amy Adams more screen time, but it’s necessary. Plus, it suits Lois’ character. She is fearlessly bold and boldly fearless, so deal with it. This is what makes her Superman’s soulmate!

We’re going to stop here for now. The next Man of Steel post we’ll go into the movie’s incredible action and effects. See you next Friday if I don’t see you before…

14 thoughts on “Why Man of Steel is a Classic”