So I saw The Amazing Spider-Man 2…

But I’m not posting my review today because I got to thinking I should preface it by revealing my thoughts on Sam Raimi’s Spider-Man trilogy from last decade. (Yeah, it’s been some time!) In other words, the time is ripe for a special running of the Nerd Triathlon: Spider-Man edition! 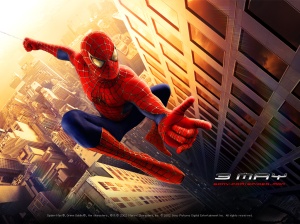 Oh, was the nerd world excited about this one! The first ever movie about Marvel’s webhead. Remember, Bryan Singer’s X-Men had been released two years earlier and was the best superhero movie yet—at least in terms of the effects being able to finally present comic book powers in a realistic way. Getting the wallcrawler on the big screen would be truly amazing.

Well, first, they didn’t call it The Amazing Spider-Man. A missed opportunity in my mind, but so be it. (I mean, you wouldn’t make a movie about the Fantastic Four and just call it “Four”, would you?)

They often stood toe-to-toe trading punches. Should have been more dynamic.

My main problem with the first one was that the fight scenes were somewhat static and the performers in the suits didn’t always move the proper way. Spider-Man almost never stands up straight! He should always look like a manlike spider. When they went to CGI, it was not completely convincing, either. (They would fix these issues in the sequel.)

The casting was pretty good. The standout has to be Willem Dafoe: his Green Goblin/Norman Osborn was a sinister, yet charismatic and sympathetic villain. Cliff Robertson was Uncle Ben. I can’t say enough about J.K. Simmons’ J. Jonah Jameson. Scenes with him were one of the things I looked forward to the most, and I really miss the character in the current series. The bit in part two where he coins the name “Dr. Octopus” is a priceless classic.

The new movies would be a lot better with me in them!

What about our leads, though? I always felt Tobey Maguire and Kirsten Dunst played some of their scenes too cool and not much like the personalities of their characters in the source material. But they did have some chemistry in the first film. Wouldn’t really last, though…

The first film Spidey was not perfect, but it was satisfying and inspiring. A great start to what could be a great series.

Featuring my favorite Spidey villain Dr. Octopus! Peter Parker does have a mirror image bad guy and for me it’s not Venom, it’s Otto Octavius. While the character of Spider-Man represents the triumph of the nerd-genius, Dr. Octopus represents the dark side that misunderstood brilliance can slide down into. Almost everything that Spidey rises above, Octavius succumbs to.

In the comics, Aunt May dated Dr. Octopus and almost married him!

This movie is absolutely a masterpiece of superhero storytelling, and the best Spidey movie so far. It will be hard to top, no matter how wild the new ones get. Because at its heart, it’s an examination of heroism as profound to me as Nietzsche or Joseph Campbell. Yeah, I’m not kidding.

As Octavius is tragically consumed by his grief and madness, Peter Parker finds himself shaken by the toll that trying to do the right thing has taken on his life and relationships. Deeper down than he even realizes, he also fears that he might go wrong like Norman Osborn and Octavius. This emotional pressure he puts himself under causes Peter to lose his powers, or rather, to mentally suppress them. At first, he tries to embrace not having to be Spider-Man anymore. But he simply cannot avoid who and what he is; he soon finds he has no choice in the matter.

I want to call attention to Aunt May, beautifully played by Rosemary Harris. She has two incredible scenes with Peter where he confesses to her his role in Ben’s death, and later when she forgives him and even gives him a peptalk about heroism—does she know about him being Spidey, or not? We’re left to wonder—anyway, Aunt May was key in this film, and Rosemary Harris did it perfectly.

I wish there had been a bit more action, but I usually feel that way. That being said, the fight scenes are truly spectacular in this one and Spider-Man fully looks, moves and feels like Spider-Man. He doesn’t talk and joke enough while in action, though; that’s a huge part of the character’s personality that Maguire and Raimi mostly left out and one of the things the new series with Andrew Garfield and director Marc Webb gets right. The Peter/Mary Jane relationship dynamics still feel a little ham-handed and forced, but her line in the epilogue to Peter “Isn’t it time somebody saved your life?” does get me all verklempt and shit.

All in all, I thought Spider-Man 2 was a masterpiece. After this one, I was sure Spider-Man 3 was going to be the fucking awesomest movie ever!!!

Now I’m not an all-out Spider-Man 3 hater. In fact, I think the first half of the film is nearly on par with the rest of the series. Harry and Peter’s first fight scene is stunning and dramatic. The creation of the Sandman and watching him gathering the human molecules of himself together was a great scene. And Gwen Stacy was on film for the first time! (Though she should have come before Mary Jane, like in the new series.)

The alien symbiote (or the weird black shit if you’ve only seen the movie) that transforms Spidey into a dick is completely dumbed down for the film. And rushing Venom into the last act and then quickly disposing of him without really making an impact on Peter’s life is the most colossal disappointment I ever had in a superhero flick. (Until 2013’s Iron Man 3 and the Mandarin travesty, that is.)

Still, as it stands, the resolution of Harry Osborn’s fate was wonderful. Seeing him and Peter fight on the same side, however briefly, was nice. James Franco was great in this one, I have to give him some love. The movie also had five or six really well-choreographed fight scenes; you can’t really quibble with the action in this one, it was pretty well done.

But again, the Peter/Mary Jane relationship and its contrived problems was more fucking ridiculous than ever. I wish they would have killed her. (I bet the theater would have cheered, which probably was not the effect the filmmakers would have preferred.) Instead, Harry snuffs it. That was actually touching…except the timing got all screwed up by Sandman getting forgiven by Spidey and allowed to breeze out of there.

They just tried to take on too much in Spidey 3. Introducing Gwen for no good reason, and giving the great villain Venom such short shrift is kind of inexcusable. I feel that the third film could have stuck with Harry as the New Goblin and Sandman and been much better. Not resolving Peter and Mary Jane’s relationship was beyond irritating. Either kill her off or they get married. It should have been resolved. Of course, they thought they were doing one more movie…

My final feelings on the trilogy: loved the first two, the second is a flat-out masterpiece—one of my favorite films ever. Tobey Maguire came the closest to nailing down Peter Parker in the second movie too, but he was never the ideal Peter Parker to me. And Spidey in battle is a flashing force of nature whose mouth is constantly working as fast as his body! The Raimi trilogy had great fight scenes but mostly forgot to have Spidey’s constant chatter and mockery of his opponents, which is a crucial part of his style. Dunst did not play a convincing Mary Jane either, not the way the character has been portrayed in the comics. But overall the trilogy does a lot of things well, and comprises two-and-a-half great superhero films that will continue to entertain us for years.

Ha ha! I’m not really gonna talk about the new one yet. But I’ll try to get my review of it up in the next couple of days. Hope to see you then, Cumberbitches and Spidey-Maniacs!